Sony Offering 3 Months of PlayStation Plus for Free with 12 Month Subscription: 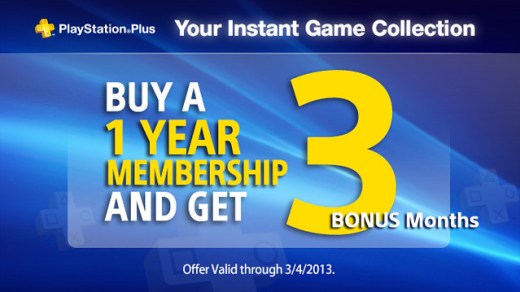 Courtesy of PlayStationBlog
Well, it seems like 2010 all over again.  Today, Sony announced a promotion for its PlayStation Plus service that sees a repeat of its launch.  If you buy 12 months of the service, you will get 3 months free.
The offer is here only for a limited time.  You must purchase it before March 4, 2013.  This is a shorter time frame than what was initially offered when it first launched, so you are going have to move fast to get it.
Also, unlike many other deals any where else in life, it is also combined with other deals.  If you are planning on purchasing the white PS3 Instant Games Collection bundle and redeem the 1-year code that comes with that system, it will also net you the extra 3 months, so there’s even more incentive to buy that console during before March 4th.
And, needless to say, if you already have an active subscription, you can still buy the year and still get the 3 months extra.
Do I really need to spell this out for you?