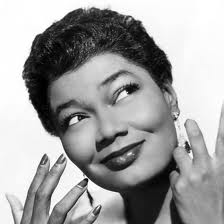 1918-1990  Pearl Mae Bailey was a Big Band Era singer and actress whose career encompassed appearances on Broadway and in film. Over a nearly 40-year span, Bailey produced hit singles, caused a sensation on stage and screen, and earned a Tony award and multiple appointments as the U.S. Goodwill Ambassador to the United Nations under Presidents Ford, Reagan, and George H. W. Bush.


Born in 1918 in Newport News, Virginia, to Pentecostal preacher Joseph Bailey and his wife Ella Mae, Bailey was performing from age three as a singer in her father’s church choir. Her entry into show business came at age 15 when she won an amateur talent contest at the Pearl Theater in Philadelphia where her mother had moved the family after splitting with Bailey’s father. Bailey captured top honors at two more talent contests, in Washington DC and at Harlem’s Apollo Theater, and dropped out of high school to join the vaudeville circuit, performing in east coast nightclubs. She appeared onstage with Count Basie, Noble Sissle, and many others.
Her first major appearance in New York was at the Village Vanguard in 1941. She then toured the USO circuit and launched a solo act in New York. Invited for a brief tour with the Cab Calloway Orchestra, she parlayed her visibility on that tour into an opportunity to become an actress in the musical theater. She made her Broadway debut in 1946, in the musical St. Louis Woman, for which she won an award for Best Broadway Newcomer. The following year, she appeared in her first film, Variety Girl, in which she sang the song “Tired.” This became a standard number for Bailey throughout her career.
Bailey subsequently embarked on a recording career. She worked with several different labels, including Columbia Records, before finally finding a hit in 1952 on Coral Records with “Takes Two to Tango.” Backed by Don Redman’s Orchestra, the song reached the Top Ten singles chart in the United States, cementing a relationship with Coral that was to last for most of the 1950s. That same year, Bailey married drummer Louis Bellson, who left his position with Duke Ellington’s band to become her musical director. Later, she and Bellson would adopt and raise two children together, Tony and Dee Dee Bellson.


In 1953, Bailey cut a second single with Coral, “Toot Toot Tootsie,” which became one of her best known songs. The following year, she was cast in the role of a fortune-teller in the 1954 film Carmen Jones. Her first starring role on Broadway came the same year in House of Flowers. Bailey also began appearing regularly on television in the 1950s, performing on such shows as Sid Caesar’s Your Show of Shows, The Colgate Comedy Hour, The Nat King Cole Show, Steve Allen, and the Perry Como Show. In 1955, she was the “mystery guest” on What’s My Line? In 1959, Bailey was cast as Maria in the premiere film version of George Gershwin’s classic American folk opera Porgy & Bess, a year that also saw a move to Roulette Records and the release of her double LP For Adults Only.

Throughout the 1960s, Bailey returned to nightclub performing, and continued to work in television and on the stage. One of the most popular Broadway musicals of the time was Hello, Dolly, and in 1967, Bailey was cast in the title role of an all-black version of the production. Backed by the Cab Calloway Orchestra, Bailey’s performance made her a major star, earning her a special Tony Award in 1968. The next year, she won an Outer Critics Circle Award for Outstanding Performance for the same role.
In 1968, Bailey released the first of three autobiographical memoirs, The Raw Pearl. She hosted a variety show of her own on ABC in 1971. Simply called The Pearl Bailey Show, it remained on the air for only one season, but her guest list included such notables as Bing Crosby, Moms Mabley, Peggy Lee, and Louis Armstrong. Bailey released her second memoir, Talking to Myself, that same year, and in 1973, she released a book of recipes, Pearl’s Kitchen: An Extraordinary Cookbook.

Bailey remained a popular television guest during the 1970s, logging appearances with such hosts as Dick Cavett, Flip Wilson, Johnny Carson, Dean Martin, and Merv Griffin, and on early episodes of The Muppets and The Love Boat. Beginning in 1970, she also assumed an ambassadorship role initiated by President Richard Nixon. He named Bailey the U.S. “Ambassador of Love,” a position formalized by President Gerald Ford when Bailey was appointed Goodwill Ambassador to the United Nations in 1974, a position she also held under Presidents Reagan and George H. W. Bush. The position was ceremonial but she cherished it, always espousing the importance of love and understanding. Bailey seized opportunities to address the UN and the World Health Organization about the need for global cooperation, and later, the AIDS epidemic. She also worked diligently with first lady Barbara Bush on a U.S. literacy campaign.
The Screen Actor’s Guild honored Bailey with a Lifetime Achievement Award in 1978 for “outstanding achievement in fostering the finest ideals of the acting profession.” By then 60 years old, Bailey opted to settle some unfinished business: she enrolled as a freshman at Georgetown University in Washington, DC, and set about earning a BA in theology from a university that had already granted her an honorary doctorate. She chronicled her experiences with higher education in her final memoir, Between You and Me: A Heartfelt Memoir on Learning, Loving, and Living, published in 1989.

Bailey died on August 17, 1990, after suffering a heart attack at a hotel in Philadelphia. In addition to her many honors as an actress and performer, she received the Presidential Medal of Freedom from President Reagan for her work with the United Nations on behalf of the United States.