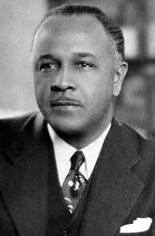 Percy Lavon Julian (1899- 1975), a grandson of slaves, became a world-renowned chemist and research scientist whose discoveries eased the pain and suffering of millions by making affordable treatments for glaucoma, rheumatoid arthritis, and cancer. With graduate degrees from Harvard University and the University of Vienna, he triumphed over institutional and social prejudice to achieve unprecedented success in his field.

Born in Birmingham, Alabama, in 1899, Julian was one of six children. Education was a passion instilled by their father (a railroad mail clerk) and mother (a schoolteacher). Two sons became physicians, three daughters earned master’s degrees, and Julian would become the most successful of the children.


Public schooling for black children was only provided up to eighth grade by the City of Birmingham, so Julian had to travel to Montgomery, Alabama, to attend high school at the State Normal School for Negroes. He was accepted at DePauw University, in Greencastle, Indiana, in 1916, but was required to enroll as a probationary student taking remedial high-school level classes along with his freshman and sophomore course load. Earning his way by digging ditches and by waiting on tables in a fraternity house, he nevertheless became a member of the Phi Beta Kappa and Sigma Xi honorary societies, and was named class valedictorian upon graduation in 1920.

After graduation, he taught for two years at Fisk University, a black college in Nashville Tennessee. He was then awarded the Austin Fellowship in Chemistry to attend Harvard University. He excelled, earning straight As and a master’s degree in 1923 at the top of his class. Again, racist presumptions frustrated his desire to teach at a major university. Warned that white students would refuse to study under an African American teacher, Julian instead taught at West Virginia State College for Negroes, and then two years as an Associate Professor of Chemistry at Howard University in Washington, DC.

With the award of a fellowship from the General Education Board in 1929, Julian pursued doctoral work at the University of Vienna in Austria, in organic chemistry and medicinal plants. In 1931, with his Ph.D. in hand, he returned for a brief stint to Howard University, and then to DePauw as a teacher in organic chemistry. At that time, chemists were just beginning to recognize a group of natural substances called steroids. Their medicinal potential was enormous, but the cost of extraction from natural sources was prohibitive. Julian, along with an associate from Vienna (Josef Pikl), joined the challenge and soon achieved the first total synthesis of a steroid (physostigmine) from the African Calabar bean, effective in the treatment of glaucoma and ultimately the prevention of blindness for millions. He earned international recognition for this work, but was denied the position of Chemistry Department Chairman due to racial prejudice.

Julian decided to forsake academics and enter commercial chemistry. An initial application to the Institute of Paper Chemistry in Appleton, Wisconsin, was refused due to a law forbidding Blacks to stay overnight in the city. A member of the Institute’s Board, W.J. O’Brien, was a Vice President of the Glidden Company in Chicago (a leading manufacturer of paint and varnish) and chose to employ the talents of this celebrated scientist. He named Julian Director of Research of the Glidden Soya Products Division in 1935 where he would remain until 1954. He was the first black scientist hired for such a prestigious position, and achieved such breakthrough discoveries as an aerofoam flame retardant based on soy protein, used by the Navy in World War II to suppress fires at sea.

In 1935, at the age of 36, Julian married Anna Johnson. His scientific success continued with an inexpensive method for developing male and female hormones (testosterone and progesterone) from soy. These would eventually be used in medicinal birth control, as well as to prevent miscarriages and to fight cancer and other grave diseases. At the time, naturally occurring cortisone was used to ease the pain of rheumatoid arthritis of the wealthy few who could afford hundreds of dollars a drop. Julian’s synthetic version could be produced at a cost of pennies per dose, and made the treatment available to millions of sufferers.

Named “Chicagoan of the Year” by the City in 1950 for his achievement, Julian and his wife felt that they had finally achieved acceptance. But when they purchased a house in the Oak Park area that year, it was set on fire by an arsonist on Thanksgiving Day. One year later, dynamite was thrown at the house from a passing car. 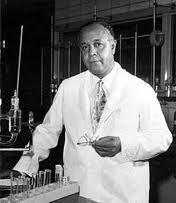 Julian started his own company, Julian Laboratories, in 1954, specializing in the production of his synthetic cortisone. With the discovery that wild yams from Mexico were more effective than soy for certain products, he started a Mexican division of the company. Smith, Kline and French bought a division of his business in 1961 for $2.3 million, making Julian one of the wealthiest and most accomplished Blacks of his era. He was also finally recognized for his scientific achievements with numerous awards and honors. His discoveries would lead directly to the development of chemical birth control, and medicines to suppress the immune system in support of organ transplants.

He died of liver cancer in 1975, renowned for his work as a chemist and as an advocate for African American scientists. He helped to found the Legal Defense and Educational Fund of Chicago, and served on the boards of many organizations.