Thoughts on Spec Ops: The Line

Thoughts on Spec Ops: The Line: 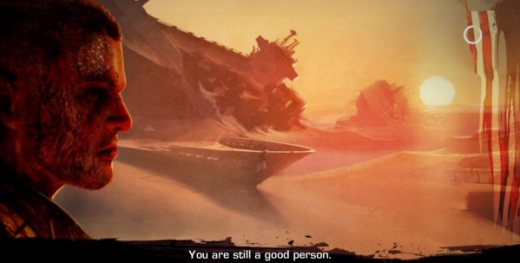 Courtesy of GameVerse.com
I’m glad the game still thinks I am….
So, during my long hiatus, I’ve been doing very little gaming.  Just haven’t had much a want to do so with so many things going down.
I did find time to play one, though.  Thanks to the PlayStation Plus Instant Game Collection, I was able to get my hands on the third person shooter Spec Ops: The Line.  This game has been hyped up for some time before, during and after its release on June 26, 2012.  It was developed by Yager Development (single player) and Darkside Game Studios (multiplayer) and published by 2K Games.
The game is about 3 soldiers sent into Dubai that has been ravaged (and continues to be ravaged) by violent sandstorms.  They are seeking a lost military battalion and the survivors they were supposed to rescuing six months before the start of the game.  What they find is a twisted city with no one seeming to trust anyone else and a lot of death. Not to mention bouts of Post Traumatic Stress Disorder.
The game, however, is really popular on what it has the player experience while playing the game.  In the game, you are given seemingly impossible choices to deal with, some of which have you literally backed into a corner.  I won’t go into any specifics so as not to spoil it, but I’m sure by now you have probably read the Wikipedia article (which I’m not going to link…gotcha).
I will say, that some of the events in the game have caused me to put the controller down and just walk away.  I don’t mean, literally sit it down with the game still on.  I actually turned off my PS3 and left to do something else in my house.  I left my office to go to another room and watch something else on TV.
There are so many different schools of thought on what story the developers were trying to tell in the game.  I side with the one’s that use this as a critique of modern military shooters which are mainly all first person shooters.  In these games, even though you may be observing the action from the eyes of your character, it still removes you from the overall sense of what is going on around you.  The screen that you use to view the environment causes a kind of tunnel vision.  Of course, you could turn around, but it still restricts from what you can see.  It lets you see the immediate situation and not the overall grand situation. I feel that Spec Ops did the right thing in choosing third person as it let you see the character and what he has to go through during the situation and also lets you see more of environment, giving you more awareness of situation.
I also feel that the story was well told.  It gives you the ability to see what happens when someone who doesn’t belong shows up and starts wrecking up the place and what ramifications that may have.  Even outside of any military conflict, you can go somewhere not having all the facts, start causing a riot, and realize there was no need for you to be in the area.  This shows that and even makes you believe to a certain point that what you are doing is right because the game limits the amount of information told to you and shows you want they want to show you as opposed to what’s really happening.
If you haven’t played this game, I really do recommend you play it.  I think its good enough to buy, but others have their opinions in the matter.  At least play it. To me, its a game for the more educated…