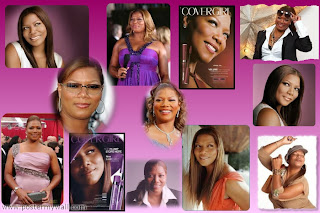 Queen Latifah is a strong woman and has a phenomenal background. Shes Liberal, Smart, Beautiful, Funny, Intelligent  and all around amazing. Her attitude towards life is so positive and I've ALWAYS admired her ability to be herself WHILE the "camera" is watching. She presents herself very well and is not ashamed of being "curvy". She is the first "Plus Size" Cover Girl Model and she looks FABULOUS on ALL of the magazine covers! If there was ever a movie about me, Queen Latifah is most certainly the ONLY woman I would want to represent me.
Posted by SherrysJoy at 2:37 PM