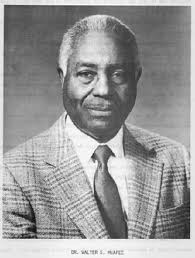 As mathematician for the U.S. Army's Project Diana in 1946, Walter S. McAfee helped advance lunar exploration in its earliest stages. His calculations made it possible to bounce a radar signal off the Moon, thus confirming that radio contact would be possible across space. An African American, he did not receive credit for his contributions until many years later.

Born in Ore City, Texas, on September 2, 1914, McAfee was the second of nine children to Luther (a carpenter) and Susie McAfee. He earned his bachelor's degree at Wiley College in 1934 and went on to earn an M.S. at Ohio State University in 1937. He would have continued his graduate studies at that point but, lacking funds, taught physics at a Columbus, Ohio, junior high school from 1939 to 1942. During this time, he met French teacher Viola Winston, whom he married in 1941. They had two daughters.

In 1942 McAfee went to work for the theoretical studies unit of the Electronics Research Command under the U.S. Army Signal Corps at Fort Monmouth, New Jersey. He soon became involved with Project Diana. The project's purpose was to bounce a radar signal off the Moon's surface, which would confirm that it was possible for a high-frequency signal to penetrate the Earth's dense ionosphere. Earlier efforts with low- and medium-frequency signals had failed.

One challenge the researchers faced was the discrepancy between the Earth's speed of rotation and that of the Moon. The Moon's speed varies by 750 mph (1,200 kph) from the Earth's speed of rotation. McAfee performed the calculations necessary to ensure that the radar pulse could bounce off the Moon, and on January 10, 1946, the team sent out the signal from a special antenna. Two and a half seconds later, they received a faint radio echo, thus establishing that communication with a spacecraft on the Moon was possible.

Initial reports on Project Diana failed to mention McAfee, and he did not receive any credit until the project's twenty-fifth anniversary in 1971. In the meantime, he had gone on to a doctorate at Cornell University, where he studied under theoretical physicist Hans Bethe (1906- ). He remained associated with the Electronics Research Command for over forty years and from 1958 to 1975 also taught nuclear physics and electronics at nearby Monmouth College.

McAfee's honors included induction into Wiley College's Science Hall of Fame in 1982. McAfee later founded a math and physical science fellowship at Wiley to encourage minority interest in those subjects. He retired in 1985 and died on February 18, 1995, at his home in South Belmar, New Jersey.

Posted by SherrysJoy at 7:04 AM