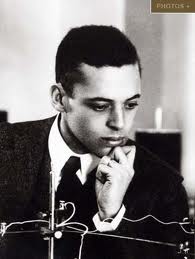 Ernest Just (1883 - 1941) was an internationally acknowledged authority in the fields of fertilization and egg development. A true scientist’s scientist, he devoted his life to expanding the bounds of knowledge and understanding. His accomplishments were enormous and enduring, despite the effects of racism in U.S. academic institutions, and his achievements continue to earn the respect of his peers to this day.

Just was born on August 14, 1883 in Charleston, South Carolina. Little is known of his early life. His parents were Charles Frazier and Mary Matthews Just. From the time of the earliest recorded information on his life, Just distinguished himself as an unusually intelligent and talented student and researcher. He completed a four-year curriculum in three years at Kimball Hall Academy in New Hampshire, and went on to Dartmouth College. There, in his first biology class, he read a paper on fertilization and egg development which catalyzed his exceptional academic and career focus. While at Dartmouth he earned the highest grades in freshman Greek, and was named the Rufus Choate scholar for two years. Graduating in 1907, he was the only magna cum laude designee, and received honors in botany and sociology as well as special honors in botany and history.


Immediately after graduation from Dartmouth, Just began teaching at Howard University, the premiere U.S. school for African Americans.  In 1911, he helped a group of students there form the Omega Psi Phi Fraternity and became its first honorary member.  He became head of the Zoology Department at Howard in 1912, while also teaching in the Medical School and serving as head of the Department of Physiology until the time of his death. In 1909, he commenced summer work at the world-renowned Marine Biological Laboratory at Woods Hole, Massachusetts, beginning as a research assistant under the Director, Frank Lillie. His work at the laboratory, which continued through 1930, would earn him international acclaim. Continuing his academic studies in tandem, Just was awarded a doctorate in experimental embryology magna cum laude from the University of Chicago in 1916, with a thesis titled “Studies of Fertilization in Platynereis Megalops.”

Just’s key contributions served to enhance our understanding of the physiology of early biological development. He focused on fertilization, cell division, artificial parthenogenesis, the physiology of cell development, and the effects of dehydration and ultraviolet radiation on cell and chromosome structure. He was a co-author of the text “General Cytology,” published in 1924, along with esteemed scientists from the University of Chicago and Princeton University, the President of the National Academy of Sciences, and the Director of the Marine Biological Laboratory. While challenging certain theories of the leading biologists of his era, he was also appreciated for his modest temperament and an unassuming dedication to scholarly pursuits. Charles Drew, another honored Black scientist and pioneer in the science of blood plasma, called Just “…a biologist of unusual skill and the greatest of our original thinkers in the field.” In 1924, he was also chosen as one of a group of specialists to contribute to a series of monographs on the function and structure of the cell.

Just served as the Julius Rosenwald Fellow in Biology of the National Research Council from 1920 to 1931. This grant program allowed him to continue his work in Europe, when racial discrimination in the United States constrained his opportunities. Just worked at the Kaiser Wilhelm Institute for Biology in Germany, at the Sorbonne in France, various Russian laboratories, and in Italy at the marine laboratories in Sicily and Naples, and lectured in Padua at the Eleventh International Congress of Zoologists in 1930. His lecture, based on his 50 papers published as of that date, was on “The Role of Cortical Cytoplasm in Vital Phenomena.” Sadly, no American research laboratories offered comparable support. As his lifelong friend and mentor, Frank Lillie, said, “That a man of his ability, scientific devotion and of such strong personal loyalties as he gave and received should have been wasted in the land of his birth must remain a matter of regret.”

In addition, Just published such books as “Basic Methods for Experiments on Eggs of Marine Animals” (based on his research at Woods Hole), and “Biology of the Cell Surface” (published in Europe during his tenure there). He was the editor of three scholarly periodicals, and was the recipient of the first Spingarn Medal for outstanding achievement by a Black American, awarded by the NAACP, in 1915.

Just died in Washington, D.C. on October 27, 1941. One of his several biographers entitled his work Black Apollo of Science: The Life of Ernest Everett Just. In the words of another, “If we are to judge his accomplishments by standards set up by men of science, it can be said that Dr. Just is an eminent scientist. If we are to judge his value to Negro education by what he has accomplished in the realm of science, it can be said that to Negro youth especially, he demonstrates the possibility of human achievement regardless of race or color.” Just’s legacy is a testimony to the power of the human mind and the scientific method to overcome barriers of logic and theory, and the resilience of the African American spirit in the face of barriers born of discrimination.

Posted by SherrysJoy at 6:53 AM