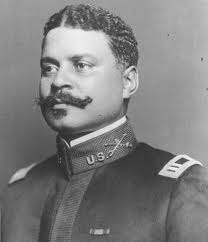 Benjamin O. Davis, Sr. (1877 -1970) dedicated his entire life and career to the military, beginning at a time when African Americans were consigned to support service roles with no command authority over whites. He rose to the rank of full General, advised the Army on integration strategies, and in the process contributed to the dismantling of segregation policies and laws throughout America, making him a hero in both realms.


Davis was born on July 1, 1877 in Washington, D.C. Little is known about his early life, but his family was comfortably middle-class, he attended the M Street High School, and went on to enter college in 1897 at Howard University. The Spanish-American War was officially declared on April 25, 1898. Davis left school to volunteer for service, joining the 8th U.S. Volunteer Infantry as a First Lieutenant. The experience must have agreed with the young man, because immediately upon mustering out of the volunteer corps in 1899 he enlisted in the Regular Army, joining the 9th U.S. Cavalry as a Private. He was stationed at Fort Duchesne, Utah.


Davis made fast initial progress through the ranks, and received his commission as a Second Lieutenant in 1901. He was assigned to duty in the Philippine Islands, still with the 9th Cavalry, but was then reassigned to the 10th Cavalry and returned with that unit to the U.S. where he served as Adjutant at Fort Washakie, Wyoming. He was promoted to First Lieutenant in 1905, and in September of that year was appointed a Professor of Military Science and Tactics at Wilberforce University in Ohio. Davis remained there until 1909, followed by a brief tour of duty at Fort Ethan Allen in Vermont, when he was detailed to Monrovia, Liberia as Military Attaché.

Davis returned to the U.S. after three years duty in Africa in 1912, at which time he was posted to garrison and border patrol duty in the West, including Wyoming and the Arizona Territory. The year 1915 brought him back to Wilberforce. In 1917, he began another three-year tour of duty in the Philippines as Supply Officer, during which time he achieved the rank of Lieutenant Colonel. 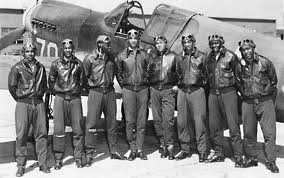 When Davis ended this Philippine tour in 1920, he was assigned to duty at Tuskegee Institute in Alabama, again as a Professor of Military Science and Tactics. He taught at Tuskegee exclusively for four years, and then became Instructor of the 372nd Infantry of the Ohio National Guard in Cleveland in 1924. After a brief year back at Wilberforce from 1929 to 1930, Davis was detailed on special duty with the U.S. Department of State for Liberian affairs, at which time he was promoted to Colonel. Subsequent teaching tours alternated between Tuskegee and Wilberforce and lasted intermittently for the next seven years. During this period, he was placed on occasional detached service in Europe with the Pilgrimage of War Mothers and Widows, for which he received a letter of commendation from the Secretary of War. 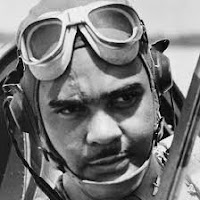 In 1937, Davis was assigned as an instructor and in 1938 Commanding Officer of the 369th Infantry of the New York National Guard, his first independent command. Two years later, in 1940, he was promoted to Brigadier General, becoming the first black soldier to hold the rank of General in the Army. In 1941 he reported for duty as a Brigade Commander with the 2nd Cavalry Division in Fort Riley, Kansas. Later that year, he was assigned duty as Assistant to the Inspector General in Washington, D.C. where he would continue to serve intermittently for the duration of his career. In 1942, with the arrival of U.S. forces in Great Britain and the escalation of World War II, Davis was assigned special duty with the European Theater of Operations and named Advisor on Negro Problems. He became Special Assistant to the Commanding General in the Communications Zone of the European Theater in 1944, stationed in Paris, France. He subsequently worked to monitor racial relations and conflicts both in Europe and at home, investigated disturbances, and boosted African American moral, ultimately persuading the Army to experiment with limited integration. 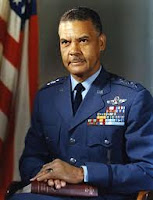 Davis retired in 1948 with 50 years of loyal service. That same year, President Harry S. Truman issued an order which forbade discriminatory practices in the armed forces, relying on the foundation built by Davis’ work. He died in Chicago, Illinois on November 26, 1970, and was buried in Arlington National Cemetery in Virginia. He was awarded an honorary L.L.D. Degree from Atlanta University, the Croix de Guerre with Palm from France, and the Grade of Commander of the Order of the Star of Africa from Liberia. His decorations and honors included the Bronze Star and the Distinguished Service Medal for “…exceptionally meritorious service to the Government in a duty of great responsibility… on matters pertaining to Negro troops. The initiative, intelligence, and sympathetic understanding displayed by him in conducting countless investigations concerning individual soldiers, troop units and other components of the War Department brought about a fair and equitable solution to many important problems which have since become the basis of far-reaching War Department policy.”

Davis was one of just six black officers in the Regular Army in the 86-year period from the Civil War to World War II. There are now approximately 10,000 due in part to his efforts to secure just treatment and rewards for black soldiers, and despite a frustrating history of so-called “safe assignments” designed to keep him from command over white troops. Davis’ son, Benjamin O. Davis, Jr., became the fourth African American graduate of the U.S. Military Academy and America’s second black general officer, as a General of the U.S. Air Force and commander of the Tuskegee Airmen, a fitting legacy for a father and a great leader.