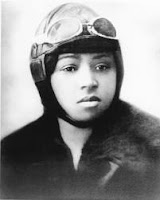 Bessie Coleman (1892 – 1926)  overcame an early life of hardship to become the first African American to earn an international pilot’s license, and the first Black woman to fly an airplane.  The symbolic power of her achievement made her an iconic figure for African Americans in the early 20th century and an inspiration for Black aviators.  In the words of Lt. William Powell (writing in the journal Black Wings), “Because of Bessie Coleman, we have overcome that which was much worse than racial barriers. We have overcome the barriers within ourselves and dared to dream.”


Coleman was born and raised in rural Texas. She showed early enthusiasm for education, despite hurdles: one of 13 children, she devoted time to her siblings as well as to the fields during cotton picking season. Her father left for Oklahoma in 1891 to seek a less discriminatory environment. Her mother opted to keep the family rooted in Texas, relying on cotton picking and work as a laundress to support them.

Coleman finished eighth grade at the top of her class, and began working as a laundress, planning to earn enough for secondary school and college. She was only able to complete one semester, and in 1915 joined her brother in Chicago. There she trained as a manicurist, became known as an exceptionally good one, and associated with many of Chicago’s most successful African Americans. Her beauty also earned her admirers, including an older man named Claude Glenn whom she married but lived with for only a short period of time. Another early fan and supporter was Robert Abbott, publisher of the Chicago Defender newspaper and one of the first Black millionaires.

World War I veterans (including Coleman’s brother) were returning from Europe with stories of aviation, and tales of French female flyers.  Coleman found her defining challenge: she would become a pilot, despite the fact that female flyers were virtually non-existent in the United States and Black women could not hope to receive instruction.  Indeed, a series of U.S. schools rejected Coleman. On the advice of Abbott (and with financial assistance from him and others), she learned French at a local Berlitz school, found a higher-paying job, and saved as much money as possible toward training in France. In 1920 she enrolled at the Ecole d’Aviation des Freres Caudron.

The only non-Caucasian in her class, she learned to fly over seven months in a 27-foot biplane of flimsy construction.  Coleman saw a fellow student crash fatally, but persevered. She was the first Black woman to earn an international pilot’s license from the Federation Aeronautique Internationale, in 1921. Over the next two months, she refined her technique with private lessons, and returned home.

Coleman’s arrival in the U.S. was hailed by the Black press and aviation journals as a historic event. The Air Service News described her as “a full-fledged aviatrix, the first of her race.” But she realized she would need training as a stunt flier in order to earn a living. She returned to Europe for instruction. Back in the U.S., in full command of her skills, confidence, beauty, and daring, she made her debut in an air show in 1922 in New York sponsored by Abbott and the Chicago Defender. She then performed in air shows countrywide, earning fans and exposure for her daring and skill.

Coleman worked selflessly to help other African Americans fulfill their dreams. She tried throughout her career to start a flying school, and refused to fly at locations that barred Blacks. And in a decision that would hurt her, she walked off a movie in which she had agreed to appear, produced and financed by African Americans, upon finding that the character presented (in her eyes) a derogatory image of Blacks. Now perceived as willful and unreliable, she had difficulty finding sponsors and support even within the African American community.

“Queen Bess,” as she had come to be known, persevered. She managed enough occasional exhibition flights to purchase an aging plane to use for her flying school. It crashed days later, leaving her in the hospital for three months and recuperating in Chicago for another 18.  Recovering her health and confidence, she announced to the Houston Post-Dispatch in 1925 that her goal was to turn “Uncle Tom’s cabin into a hangar by establishing a flying school.” Coleman began lecturing, spreading her message of inspiration.  She started a beauty parlor to raise funds, and received assistance from a wealthy friend to purchase a World War I Army surplus plane.

The day before her first scheduled appearance in the plane, Coleman and her mechanic went up for a test run. A wrench became fouled in the plane’s gears, causing it to go out of control and dive with the mechanic at the controls. Coleman was thrown out and fell to her death, while the plane crashed.  Over 10,000 mourners paid their respects to this heroic figure, who (in the words of the resolution requesting the stamp in her honor) “continues to inspire untold thousands, even millions of young persons with her sense of adventure, her positive attitude, and her determination to succeed.”