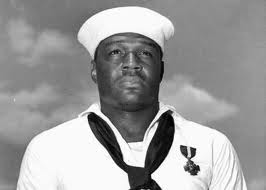 1919-1943  During a short-lived but distinguished Navy career, Doris “Dorie” Miller, with limited training and on his own volition, fought at Pearl Harbor against attacking Japanese planes with anti-aircraft guns to defend his ship and his country.

Miller was born in 1919 in Waco, Texas, the third of four sons of sharecroppers Conery and Henrietta Miller. He helped his father work the family cotton farm through early adulthood, while also using his unusual size and weight (five feet nine inches, and over 200 pounds) to play fullback on the Moore High School football team. The desire to earn money to help his family, as well as to experience more of the world beyond the farm, led Miller to enlist for a six-year tour of duty in the Navy as a Mess Attendant, Third Class, in 1939, the only classification permitted to African Americans at that time.


Miller did his basic training at the Naval Training Station in Norfolk, Virginia, and reported to his first duty station in November of that same year. He served as a mess attendant, for the most part waiting on tables in the dining facilities of the ammunition ship USS Pyro. Soon after, he transferred to the battleship USS West Virginia, continuing his mess attendant duties. There, he also became the West Virginia’s heavyweight boxing champion. A two-month temporary tour of duty in June and July of 1940 took Miller to the Secondary Battery Gunnery School aboard the USS Nevada, after which he returned to the West Virginia in August 1940.

On December 7, 1941, Miller was serving aboard the West Virginia, anchored in Peal Harbor, Hawaii. The Japanese attacked the U.S. fleet that day.

Miller arose at six o’clock that Sunday morning, and was collecting laundry on deck when the general quarters alarm sounded. No one had expected the attack, but within minutes the entire U.S. fleet was engulfed in a massive offensive by Japanese torpedo planes, bombers, and kamikaze fighters. In response, Miller went directly to his assigned battle station, the anti-aircraft battery magazine located amidships. However, the battery magazine had already been destroyed by Japanese torpedoes. Miller then went on deck, where amid smoke, fire, and explosions, and because of his physical size and strength, he was ordered to help carry wounded sailors to safer locations on the ship. Soon after, he was dispatched to the bridge by an officer to assist the ship’s Captain, Mervyn Bennion, who had been badly wounded. Miller helped carry Bennion off the bridge.

The same officer then saw two unmanned 50-caliber Browning anti-aircraft machine guns on deck. He called on two trained sailors to take charge, and instructed Miller to keep them supplied with ammunition. But when the officer was called away before the trained gunners could arrive, Miller manned one of the guns. Despite his lack of training, he drew on his early experience shooting rifles on the family farm, and by his own account, it came naturally: “It wasn’t hard. I just pulled the trigger and she worked fine.” Witnesses say his marksmanship was outstanding. He is generally credited with shooting down three Japanese planes, and some accounts estimate as many as six. But Miller’s heroic actions were brought to a halt by two armor-piercing bombs exploding on deck and five 18-inch torpedoes blasting into the West Virginia’s port side. He and the rest of the crew were ordered to abandon ship, which flooded below decks and sank in the harbor’s shallow water. In the course of the attack, 130 men died and 52 were wounded of the West Virginia’s 1,541 crewmembers. 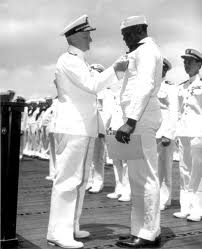 Soon after, Miller was transferred to the cruiser USS Indianapolis, where he spent the next 17 months. He was commended by Secretary of the Navy Frank Knox for bravery in the Pearl Harbor attack in 1942, and then received the Navy’s highest award for valor, the Navy Cross, from the Commander in Chief of the Pacific Fleet, Chester W. Nimitz, who stated: “This marks the first time in this conflict that such high tribute has been made in the Pacific Fleet to a member of his race and I’m sure that the future will see others similarly honored for brave acts.” He received a hero’s welcome in Waco and Dallas on shore leave. Over the course of this part of his career, Miller was advanced to Mess Attendant, Second Class, and then First Class, and was promoted to Ship’s Cook, Third Class.

In the spring of 1943, Miller, then based in Bremerton, Washington, at the Puget Sound Navy Yard, was assigned to the newly built escort carrier USS Liscome Bay. The ship steamed into Pearl Harbor in late October to join the Northern Attack Force and Operation Galvanic. This invasion of the Gilbert Islands was a major component of the American strategy in the central Pacific theater, and began with the capture of Makin and Tarawa Islands in November. In the early morning of November 24, cruising near Butaritari Island, the Liscome Bay was struck near the stern by a torpedo from a Japanese submarine, which hit the carrier’s bomb magazine. Engulfed in flames within minutes, the ship sank with most of its crew still on board. Miller was not among the 272 rescued.

Along with the other missing sailors, Miller was officially presumed dead by the Navy in 1944. He earned numerous honors during his years of service, including the Purple Heart, the World War II Victory Medal, and the Asiatic-Pacific Campaign Medal; and in 1973, the frigate USS Miller was commissioned by the Navy. Miller was one of four sailors recognized for serving with “bravery and distinction” by the Distinguished Sailors U.S. Postal Service stamp series in 2010.

Posted by SherrysJoy at 5:30 AM