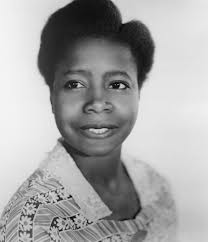 Thelma "Butterfly" McQueen (January 7, 1911 – December 22, 1995) was an American actress. Originally a dancer, she was an actress best known for her role as Miss Scarlett's squeaky-voiced maid, "Prissy" in "Gone With the Wind." Her delivery of her most memorable line, "...We got to have a doctor, I don't know nothin' 'bout birthin' babies," took Hollywood by storm.

Thelma's parents were Walter and Stella McQueen, who in 1910 lived at 229 Elliott Street in Port Tampa. Walter was a stevedore at the port's phosphate elevators and Stella was a housewife. Thelma was born on Jan. 8, 1911, and shortly afterward her parents separated. When Thelma was five years old, her father deserted the family. In order to support herself and her daughter, Stella McQueen sought full-time employment in a number of cities up and down the East Coast, sending Thelma to live with an aunt in Augusta, Georgia, until she had settled on a job as a cook in Harlem.


As a teen-ager, Thelma attended high school in Babylon, Long Island, and later moved to Harlem. After a brief stint in nursing school, Ms. McQueen pursued her acting career, finding that the stage was much more exciting than a hospital. McQueen initially studied with Janet Collins and went on to dance with the Venezuela Jones Negro Youth Group. Around this time she acquired the nickname "Butterfly"—a tribute to her constantly moving hands—for her performance of the Butterfly Ballet in a production of A Midsummer Night's Dream (she had always hated her birth name, and later legally changed her name to Butterfly McQueen).  She performed with the dance troupe of Katherine Dunham before making her professional debut in George Abbott's Broadway show   "Brown Sugar" in 1937. She became a permanent member of the Abbott Acting Company.

She earned her greatest stage recognition in "What a Life" and during its run was offered the role of Prissy in Gone With the Wind, 1939. While the part verged on stereotype, McQueen brought a comic pathos to her portrayal. Like many black actors in 1940s Hollywood, McQueen found few challenging roles and was usually relegated to playing domestics. Among her better known films are Vincente Minnelli's "Cabin in the Sky" (1943), Michael Curtiz' "Mildred Pierce" (1945) and King Vidor's "Duel in the Sun" (1947). Offscreen, however, she rebelled against Hollywood's rigid system of racial stereotyping and often insisted on altering scenes and dialogue that demeaned people of color. McQueen's announcement in 1947 that she would no longer accept so-called "handkerchief head" parts nearly cost the actress her career.

Ms. McQueen devoted her later years to serving the African-American community, saying she also felt it necessary to acknowledge the history of black slavery in the United States. "As I look back on "Gone with the Wind," for instance, I feel it is useful to have this authenticity," she once said. "We've got to know more about where we've come from. I wasn't too happy about the whole thing, but also later in life, as I looked around, I decided to take what I could get and then use it for what I want to do."

In 1951, she put on a one-woman show at Carnegie Hall, but she soon found she had to take on other jobs to support herself. During the 1950's, she worked as a companion for a woman in Long Island and sold toys at Macy's. At one time, she began her own radio show in Augusta, "to instill pride in the neighborhood," she said.

But it was upon her return to Harlem one year later that she found a second vocation -- helping her community. She plunged into antipoverty work and took a job as a waitress in a soul food restaurant. Fond of children, she worked at the Mount Morris Park Recreation Center as a receptionist. Her distinctive voice could be heard through the corridors as she gave tap dance and ballet lessons. She defined herself at the time through her commitment to the "black family," she said.

Ever restless and determined, Ms. McQueen, who had never completed college, graduated with a degree in political science from City College in 1975 at the age of 64. McQueen never married and never had children. She lived in New York in the summer months, and in Augusta, Georgia during the winter.

At age 84, Ms. McQueen was critically burned when a kerosene heater in her one-bedroom cottage just outside Augusta, Ga., caught fire. She suffered burns over 70 percent of her body and died at Augusta Regional Medical Center on Dec. 22, 1995.
*Article Courtesy Of
http://www.tampapix.com/mcqueen.htm

Posted by SherrysJoy at 7:09 AM