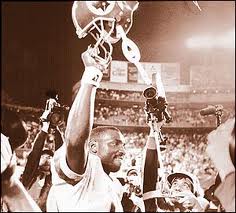 Douglas Lee Williams (born August 9, 1955 in Zachary, Louisiana) is best known for his MVP performance in Super Bowl XXII against the Denver Broncos. He is, to date, the only African American quarterback who has won the Super Bowl.

Williams was drafted in the first round (17th overall) of the 1978 NFL Draft, chosen by the Tampa Bay Buccaneers out of Grambling State University. The Bucs, who had never been to the playoffs before Williams arrived, went to the playoffs three times in four years and played in the 1979 NFC Championship Game. Williams improved his completion percentage each year with the Bucs and was regarded as the heart and soul of the team.

Doug Williams was the only starting African-American quarterback in the NFL at that time. During his tenure with the Buccaneers, Williams was only paid $120,000 a year—far and away the lowest salary for a starting quarterback in the league, and behind 12 backups. After the 1982 season, Williams asked for a $600,000 contract. Bucs owner Hugh Culverhouse refused to budge from his initial offer of $400,000 despite protests from coach John McKay. While Culverhouse's offer was still more than triple Williams' previous salary, he would have still been among the lowest-paid starters in the league. Feeling that Culverhouse wasn't paying him what a starter should earn, Williams bolted to the upstart United States Football League. The next year the Bucs went 2-14, and they would not make the playoffs again for 14 years until after the 1997 season, and lost ten games in every season but one in that stretch. Many Bucs fans blame Culverhouse's refusal to bend in the negotiations with Williams as a major factor. Culverhouse's willingness to let Williams get away over such a relatively small amount of money was seen as particularly insensitive, coming only months after Williams's wife Janice died of a brain tumor

After the USFL shut down in 1986, Williams returned to the NFL, joining the Washington Redskins at the behest of Redskins coach Joe Gibbs, who had been the offensive coordinator at Tampa Bay when Williams was there.

Initially Williams served as the backup for starting quarterback Jay Schroeder, but after Schroeder became injured, Williams stepped in and led the Redskins to an opening-day victory against the Philadelphia Eagles. It would be one of three times in 1987 that Williams subbed for Schroeder and led the team to victory (the other two were 11/15 vs. Detroit and 12/26 at Minnesota). Williams only started two games, 9/20 at Atlanta and 11/23 vs. the Rams. While both starts were losses, at the end of the season, when the Redskins had qualified for the playoffs, Williams, with his 94.0 passer rating, was chosen as the starter. He led the team to Super Bowl XXII in which they routed the Denver Broncos, becoming the first black quarterback to play in a Super Bowl, and as of Super Bowl XLIII, the only black quarterback to win one.

Facing legendary Denver Broncos quarterback John Elway, Williams engineered a 42-10 rout, in which the Redskins set an NFL record by scoring five touchdowns in the second quarter. Williams completed 18 of 29 passes for 340 yards, with four touchdown passes, and was named Super Bowl MVP.

Williams started off his college head coaching career at Morehouse College in 1997. He also has previous NFL experience as a scout for the Jacksonville Jaguars in 1995 and as offensive coordinator for the Scottish Claymores of the World League of American Football in 1995, and tutored running backs for Navy in 1994. Williams also excelled on the high school level as head coach and athletic director at Point Coupee High School in New Roads, Louisiana in 1991, and in 1993, he was head coach at Northeast High School in his hometown of Zachary, Louisiana, where he guided the team to a 13-1 record and the state semifinals.

Williams became the head football coach at Grambling State University in 1998, succeeding the legendary Eddie Robinson. He led the Tigers to three consecutive Southwestern Athletic Conference titles from 2000-2002, before leaving to rejoin the Tampa Bay Buccaneers as a personnel executive. Williams was promoted to the position of director of professional scouting in February 2009 for the Tampa Bay Buccaneers.

On May 11, 2010, it was announced that Williams would no longer be the director professional scouting for the Tampa Bay Buccaneers.[10] He was subsequently hired as the general manager of the Norfolk expansion franchise in the United Football League, now known as the Virginia Destroyers. 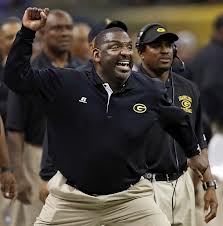 On February 21, 2011, Williams resigned from the Destroyers to begin his second stint as the head football coach at Grambling State University.