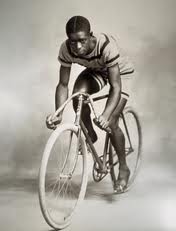 Marshall "Major" Taylor (1878 - 1932) combined fortunate circumstances and incredible athletic ability to become a world record-holding competitive cyclist at the dawn of the sport. He is recognized as the first African American to earn international acclaim in organized sports.

Taylor was born on November 26, 1878, in Indianapolis, Indiana. One of eight children, his given name was Marshal Walter Taylor. His parents, Gilbert Taylor and Saphronia Kelter, had left rural Kentucky following the Civil War. Many Blacks were emigrating to cities at the time in search of better economic opportunities, and Taylor’s father was among the fortunate who succeeded in finding them. He was a coachman for the wealthy Southard family, which allowed the Taylors to live on the grounds of a peaceful estate and raise their children in relative comfort. The Southards were kind to Taylor and occasionally gave him gifts, including a bicycle.


Taylor quickly developed a joy for cycling, and exhibited a natural grace and fluidity atop the machine. In order to earn money, and to indulge his passion for bicycles, he worked at a local bicycle shop as early as age 12. Taylor entertained his coworkers with a surprising repertoire of tricks and stunts that he had taught himself to perform. He was so impressive that the bicycle shop paid him to perform on the street in order to draw onlookers into the store. As part of the routine, Taylor was given an old soldier’s uniform, which led to the nickname he would keep for the remainder of his life, “Major.”

At age 13, Taylor won his first bicycle race. He became a regular on the burgeoning amateur racing circuit in Indianapolis, frequently winning over white competitors with impressive reputations and better equipment. A bicycle manufacturing entrepreneur, Louis “Birdie” Munger, recognized Taylor’s significant talent and became his promoter. With Munger’s guidance, Taylor became increasingly dominant, which aggravated racial tensions in segregated Indianapolis. Cycling was becoming a hugely popular sport, and some segregationists were so upset to see a black man winning races that Taylor began to receive threats. In search of a more tolerant community and better business opportunities, Munger and Taylor moved to Worcester, Massachusetts, in 1895. Munger opened the Worcester Cycle Manufacturing Company, and Taylor, welcomed into the traditionally abolitionist community, began training in earnest for a career as a professional bicycle racer. 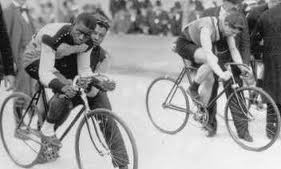 In preparation for professional competition, Taylor returned to the Indianapolis Capital City Track in 1896 and set two unofficial world records for one-mile sprint races. His reward was a ban from the track at the behest of segregationists. Taylor’s professional debut occurred in New York City at Madison Square Garden. He managed to place eighth, but the event was a six-day endurance trial and his specialty was sprint racing up to two miles. By 1898, Taylor held seven world records for various sprint distances, but these were timed achievements: he had yet to prove his mettle in head-to-head international competition.

When the World One Mile Sprint Championship was held in Montreal, Canada, the following year, Taylor got his chance. He defeated his most ardent rival, Tom Butler from Boston, and earned the title of World Champion. The only black man to hold such a title in any sport prior to Taylor was George Dixon, who had won the bantamweight boxing title in 1890. Controversy over his race continued. Taylor was refused membership in the League of American Wheelmen, the predominant organization for cycle racing enthusiasts, and was continually denied entry into races held in southern states. In part because of the controversy surrounding him, however, he caused a commotion everywhere he traveled and racing fans adored him. For most of the country, Taylor was a national hero. In 1900, Taylor was finally allowed to compete in the United States National Championship where he captured the American Sprint Champion title as well.

With Munger’s constant support and negotiating skills, Taylor earned good money at the races he did enter, and by late 1900, he was able to marry Daisy Victoria Morris and settle in an affluent neighborhood of Worcester. The couple eventually had a daughter, Sydney, who was born in 1904. Before the birth of his child, Taylor rode to international acclaim by making several tours of Europe and Australia between 1901 and 1904. He emerged victorious in sprint competitions with the reigning champions of Belgium, Denmark, England, Germany, and Italy. His rare combination of grace and tremendous power was hailed wherever Taylor traveled and raced. After his string of successful international races, Taylor retired from competitive cycling.

Although he returned to competition sporadically until 1910, and frequently won races, the height of his career came with his national and world titles, and his undefeated overseas tours. Following his retirement, at age 32, Taylor’s savings were sapped by poor business investments. Unable to initiate a second career, he was forced to slowly sell off assets as the family dwindled into poverty. Taylor self-published an autobiography in 1929, but was unable to sell sufficient copies to earn any money from the venture. After becoming estranged from his wife, he spent his final years living at a YMCA in Chicago, Illinois. On June 21, 1932, Taylor died in the charity ward of a Chicago hospital. 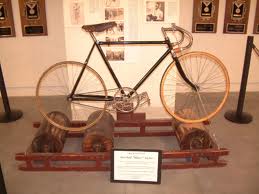 Taylor and his accomplishments returned to prominence in the decades following his death. The Schwinn Bicycle Company funded a new gravesite for him, with a commemorative plaque detailing his accomplishments. In 1982, Indianapolis embraced the hero it had once shunned by dedicating the Major Taylor Velodrome for international cycling competition. Taylor’s legend and legacy were celebrated in the 1991 film, Tracks of Glory. A consistently positive attitude and good will toward his rivals accompanied Taylor’s incredible athleticism in his voyage to the pinnacle of his sport, and he continues to be celebrated for those characteristics, as much as for his long list of victories.