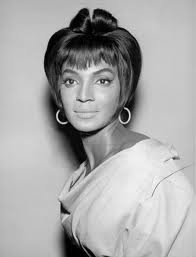 Nichelle Nichols (born Grace Dell Nichols; December 28, 1932) is an American actress, singer and voice artist. She sang with Duke Ellington and Lionel Hampton before turning to acting. Her most famous role is that of communications officer Lieutenant Uhura aboard the USS Enterprise in the popular Star Trek television series, as well as the succeeding motion pictures, where her character was eventually promoted in Starfleet to the rank of commander. Her Star Trek character was groundbreaking in U.S society at the time, and civil rights leader Martin Luther King, Jr. personally praised her work on the show and asked her to remain when she was considering leaving the series.

Nichols was born in Robbins, Illinois, near Chicago, to Samuel Earl Nichols, a factory worker who was both the town mayor of Robbins and its chief magistrate, and his wife Lishia (Parks) Nichols. Later, the family moved into an elegant apartment in Chicago. 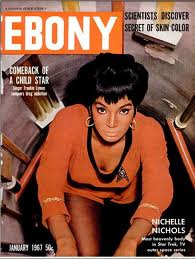 In January 1967, Nichols also was featured on the cover of Ebony magazine, and had two feature articles in the publication in five years.

Nichols toured the United States, Canada and Europe as a singer with the Duke Ellington and Lionel Hampton bands. On the West Coast, she appeared in The Roar of the Greasepaint—the Smell of the Crowd, For My People, and garnered high praise for her performance in the James Baldwin play, Blues for Mister Charlie. Prior to being cast as Lieutenant Uhura in Star Trek, Nichols was a guest actress on television producer Gene Roddenberry's first series The Lieutenant.

It was in Star Trek that Nichols gained popular recognition by being one of the first black women featured in a major television series not portraying a servant; her prominent supporting role as a bridge officer was unprecedented. During the first year of the series, Nichols was tempted to leave the show, as she wanted to pursue a Broadway career; however, a conversation with Dr. Martin Luther King, Jr., changed her mind. She has said that King personally encouraged her to stay on the show, telling her that he was a big fan of the series. He said she "could not give up" because she was playing a vital role model for black children and young women across the country, as well as for other children who would see African Americans appearing as equals. It is also often reported that Dr. King added that "Once that door is opened by someone, no one else can close it again."

Former NASA astronaut Mae Jemison has cited Nichols's role of Lieutenant Uhura as her inspiration for wanting to become an astronaut and Whoopi Goldberg has also spoken of Nichols's influence. Goldberg asked for a role on Star Trek: The Next Generation, and the character of Guinan was specially created, while Jemison appeared in an episode of the series.

In her role as Lieutenant Uhura, Nichols famously kissed white actor William Shatner as Captain James T. Kirk in the November 22, 1968, Star Trek episode "Plato's Stepchildren". The episode is popularly cited as the first example of an inter-racial kiss on United States television. 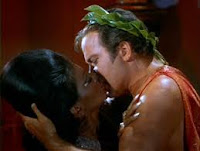 The Shatner-Nichols kiss was seen as groundbreaking, even though the kiss was portrayed as having been forced by alien telekinesis. There was some praise and some protest. In her 1994 autobiography, Beyond Uhura, Star Trek and Other Memories, on page 197 Nichols cites a letter from one white Southerner who wrote: "I am totally opposed to the mixing of the races. However, any time a red-blooded American boy like Captain Kirk gets a beautiful dame in his arms that looks like Uhura, he ain't gonna fight it." During the Comedy Central roast of Shatner on August 20, 2006, Nichols jokingly referred to the groundbreaking moment and said, "Let's make TV history again ... and you can kiss my black ass!"

Despite the cancellation of the series in 1969, Star Trek lived on in other ways, and continued to play a part in Nichols's life. She again provided the voice of Uhura in Star Trek: The Animated Series; in one episode, "The Lorelei Signal", Uhura assumes command of the Enterprise. Nichols noted in her autobiography her frustration over this never occurring in the original series. Also, Nichols has co-starred in six Star Trek motion pictures, the last one being Star Trek VI: The Undiscovered Country.

After the cancellation of Star Trek, Nichols volunteered her time in a special project with NASA to recruit minority and female personnel for the space agency, which proved to be a success. She began this work by making an affiliation between NASA and a company which she helped to run, Women in Motion.

An enthusiastic advocate of space exploration, Nichols has served since the mid-1980s on the Board of Governors of the National Space Society, a nonprofit, educational space advocacy organization founded by Dr. Wernher von Braun.

Always interested in space travel, Nichols flew aboard NASA's C-141 Astronomy Observatory, which analyzed the atmospheres of Mars and Saturn on an eight-hour, high-altitude mission. She was also a special guest at the Jet Propulsion Laboratory in Pasadena, California, on July 17, 1976, to view the Viking 1 soft landing on Mars. Along with the other cast members from the original Star Trek series, she attended the christening of the first space shuttle, Enterprise, at the North American Rockwell assembly facility in Palmdale, California.

On July 14, 2010, she toured the space shuttle simulator and Mission Control at the Johnson Space Center. 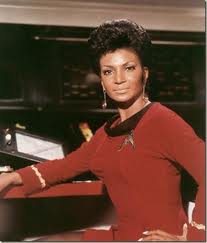 In 1994, she published her autobiography Beyond Uhura: Star Trek and Other Memories. In it, Nichols claimed that the role of Peggy Fair from the television show Mannix was offered to her during the final season of Star Trek but producer Gene Roddenberry refused to release her from her contract. Between the end of the original series and the Star Trek animated show and feature films, Nichols appeared in small TV and film roles. She portrayed a foul-mouthed madam in Truck Turner (1974) opposite Isaac Hayes - which was her only appearance in a blaxploitation film.

Nichols appeared in animated form as one of Al Gore's Vice Presidential Action Rangers in the "Anthology of Interest I" episode of Futurama, and provided the voice of her own head in a jar in the episode "Where No Fan Has Gone Before". She voiced the recurring role of Elisa Maza's mother, Diane Maza in the animated series Gargoyles and played the role of Thoth-Kopeira in an episode of Batman: The Animated Series. In 2004, she provided the voice for herself in The Simpsons episode "Simple Simpson".

In the 2002 comedy Snow Dogs, Nichols appeared as the mother of the male lead, played by Cuba Gooding, Jr. In 2006, Nichols appeared as the title character in the film Lady Magdalene's, the madam of a legal Nevada brothel in tax default. She also served as executive producer, choreographer, and sang three songs in the film, two of which she composed. She has twice been nominated for the Sarah Siddons Award as best actress and is an accomplished dancer and singer. Her first Siddons nomination was for her portrayal of Hazel Sharp in Kicks and Co. and the second for her performance in The Blacks.

Nichols was cast in a recurring role on the second season of the NBC drama Heroes. Her first appearance was on the episode "Kindred" which aired on October 8, 2007. Nichols portrayed Nana Dawson, the matriarch of a New Orleans family financially and personally devastated by Hurricane Katrina. She cares for her orphaned grandchildren and her great-nephew, series regular Micah Sanders.

In 2008, she starred in the film The Torturer, playing the role of a psychiatrist.

In 2009, she joined the cast of The Cabonauts, a sci-fi musical comedy that debuted on the internet. Playing CJ, the CEO of the Cabonauts Inc, Nichelle is also featured singing and dancing.

Nichols has released two music albums. Down to Earth is a collection of standards released in 1967, during the original run of Star Trek. Out of This World is more rock oriented and is themed around Star Trek and space exploration.

Nichols' brother, Thomas, was a member of the Heaven's Gate cult; he died on March 26, 1997, in their mass suicide which purposely coincided with the passing of the Hale-Bopp comet. A member for eleven years, he left an exit video saying "I'm the happiest person in the world." 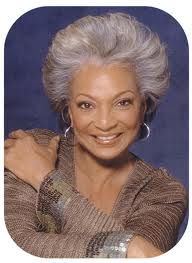 Nichols' son is actor Kyle Johnson, who played the lead in Gordon Parks's The Learning Tree. Kyle is her son from her marriage to Foster Johnson in 1951, which was the same year she divorced him. She married again in 1968, but that marriage also was short-lived and ended in divorce.

In her autobiography, Nichols stated that she was involved in an extramarital affair with Star Trek creator  Gene Roddenberry for several years in the 1960s. When Roddenberry's health was fading, Nichols co-wrote a song for him, titled Gene, that she performed at his funeral.