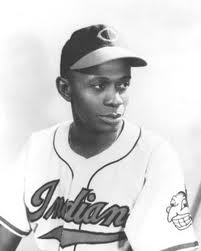 Satchel Paige (1906? - 1982) was the top pitcher in baseball’s Negro League.  He became one of the first African Americans to play major league baseball and continued pitching for over a span of 40 years. He was named the first black player in the Baseball Hall of Fame, and is famously remembered for saying, “Don’t look back. Something might be gaining on you.”

Paige was born Leroy Paige in 1906, in Mobile, Alabama, the seventh of 12 children. He earned his nickname carrying satchels for railroad travelers, which he would occasionally try to steal. At age 12, he was charged with truancy and shoplifting and sent to the Industrial School for Negro Children in Mount Meigs, Alabama. An instructor there helped him develop a pitching technique.


Released in 1923, Paige began playing with semiprofessional teams, enhancing his skills and showmanship. He signed his first professional contract with a Negro Southern League team, the Chattanooga Black Lookouts, for $50 per month for the 1926 season. By 1927, his monthly salary was raised to $200, but he switched to the Birmingham Black Barons of the Negro National League and $275 that season. His record with the Barons was impressive, culminating with the Negro League strikeout record in 1929.

By then, the Barons’ owner had begun “renting out” Paige to other clubs, since his growing reputation was a reliable draw. This pattern would continue for much of his career, with exhibition games and short-term contracts alternating with longer-term stints. At about the same time, Paige accepted a lucrative $100 per game to play in Cuba, the first of several international contracts. Returning to the United States in 1930, he played for American Negro League champions the Baltimore Black Sox and then the Chicago American Giants, followed by a 1931 signing with the Crawford Colored Giants of Pittsburgh. He continued to distinguish himself with Crawford in loan-outs, and in All-Star games for the next several years. In 1934, Paige married his longtime romantic interest Janet Howard. That year, his record for all games pitched was a phenomenal 31 wins and four losses. 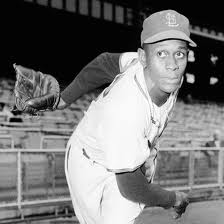 Paige accepted a promoter’s offer in 1935 to form his own barnstorming team. The Satchel Paige All-Stars, whose publicity guaranteed that Paige would strike out the first nine batters, went up against Joe DiMaggio in his last minor league game. Of his experience, DiMaggio called Paige “…the best I’ve ever faced, and the fastest.” After subsequent stints with Crawford and other barnstorming teams, Paige was hired in 1937 by a Dominican Republic team to recruit players. He brought eight top Negro League players with him; but after returning to the United States, they were banned from the League and formed a barnstorming team called Trujillo’s All-Stars after the Dominican dictator. Then in 1938, playing for a Mexican team at an astonishing $2,000 per month, Paige’s pitching arm gave out after over a decade of exhausting service.

After seven months of restful inactivity, Paige was picked up by the owner of the Kansas City Monarchs for a traveling division of that team, and learned to use finesse and control in his pitching. He again became a draw for loan-outs, including one for the New York Black Yankees in 1941 when Life magazine did a photo essay on him. The Monarch’s owner bought a DC-3 airplane to convey Paige to his many engagements. Not long after, Janet Paige divorced him. With the U.S. entry into World War II, Paige devoted himself to playing games in support of war bonds and charities, including a game at Chicago’s Wrigley Field that marked the first time an African American team played in that stadium. By then, he was earning $40,000 annually, one of the highest paid athletes in the world. Paige played for the Monarchs in the 1942 Negro League World Series, which the team swept, with Paige winning the last three games. 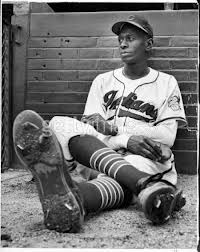 After the 1946 Negro League World Series, he formed another all-star team, and in 1947, married Lahoma Brown with whom he would have four children. The following year, the Cleveland Indians’ owner was in urgent need of pitching talent. He tested Paige, and signed him that day to a major league contract for $40,000 for the three months remaining in the season. Paige became the oldest rookie, the first black pitcher in the American League, and the seventh African American to join major league baseball. His games attracted record-breaking attendance with over 201,000 at his first three. He ended the year with a superlative 6-1 record, a 2.48 earned run average (ERA), 45 strikeouts, two shutouts, and two base hits, and helped the Indians win the World Series.

With ownership changes, Paige was dropped by the Indians and became a top relief pitcher for the St. Louis Browns. Casey Stengel appointed him to the American League All-Star team in 1952 and 1953, making him the first black pitcher and the oldest athlete so honored. Further ownership changes resulted in Paige’s return to the Negro Leagues, more barnstorming, international and regional league play, and even a stint with the baseball act of the Harlem Globetrotters. He appeared with Robert Mitchum in a 1957 movie, “The Wonderful Country,” and his autobiography, published in 1962, went to three printings. In 1965, the master showman mocked his age in a game with the Kansas City Athletics by sitting in the dugout in a rocking chair with a “nurse.” At age 58, he pitched three shutout innings. He pitched his final organized baseball game in 1966. A failed run for state assembly was followed by a contract with the Atlanta Braves as a pitching coach in 1969. That year, the Commissioner of Baseball appointed a committee to nominate the first African American inductees to the Hall of Fame. In 1971, Paige became the first black member. 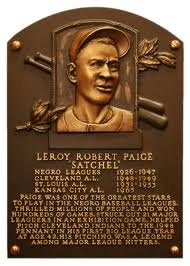 He subsequently advised a television movie about his life, “Don’t Look Back,” starring Louis Gossett, Jr., and served as vice-president of the regional Springfield Redbirds. After several years of declining health, Paige died in 1982 at home in Kansas City. He continues to serve as an inspiration to athletes, and to all who aspire to transcend boundaries, excel, and succeed.